By November, the song of the wood thrush has disappeared, replaced by the melodic tune of the hermit thrush. Juncos and a number of sparrows, including tree, fox, white-throated and white-crowned sparrows have returned. Brown creepers will start showing up on tree trunks, along with winter wrens (smaller and more shy than our year-round Carolina wrens), and well-drilling yellow-bellied sapsuckers. You may also see more duck species, especially common golden-eyes and hooded mergansers. If you are very lucky, you might catch a glimpse of short-eared or northern saw-whet owls, which are sometimes spied in the Triangle during the winter months.

In mid-November, you might find pine-siskins flocking to feeders, mixed with year-round resident goldfinches and migratory purple finches. At the end of the month, look for golden-crowned kinglets (Regulus satrapa). Rusty blackbirds (Euphagus carolinus) also return to the Piedmont in mid-November, spied amongst flocks of grackles and starlings. According to the Cornell Lab of Ornithology, over the past forty years rusty blackbird populations have declined between 85% and 99% and scientists don’t yet know why. Some researchers from the International Rusty Blackbird Technical Working Group suspect that this decline is related to the species strict reliance on disappearing wooded wetland habitat.

If you aren’t able to find siskins and kinglets, you should be able to observe hawks flying high overhead or low through the forest. In the Piedmont, we have two fast-flying forest hawks, or Accipiters: the Cooper’s hawk (Accipiter cooperii) and the sharp-shinned hawk (Accipiter striatus). From afar, these two species are difficult to tell apart. Adults of both species are bluish-gray above with banded tails with rusty-barred breasts. Cooper’s hawks are larger than sharp-shinned hawks, but size can be difficult to estimate in the field. Moreover, both species feed primarily on birds. While the sharp-shinned hawk preys almost entire upon birds, the Cooper’s hawk will also take a number of small mammals.

The Environmental Science Summer Program at Duke is now accepting applications for 2017!

Please share this opportunity with rising Sophomores, Juniors, & Seniors in the Triangle Area. 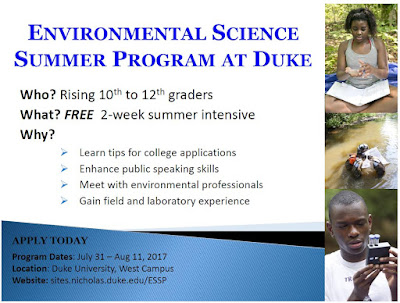 All students are welcomed to apply. We are looking for a diversity of students interested in college advancement and environmental science, representing a range of races, ethnicities, and socioeconomic statuses. 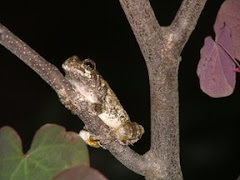